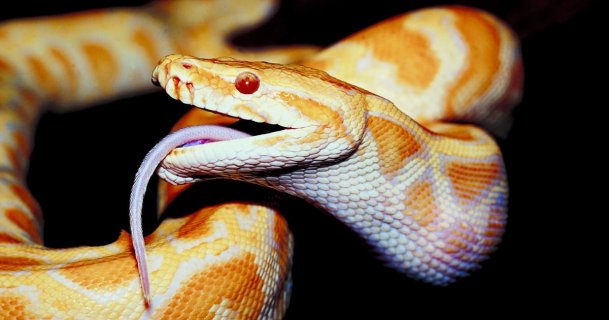 Strapped to Billy Bullard's hip was a machete he'd bought at a yard sale. In his fist were 4-foot-long metal snake tongs. Attached to the tongs was a high-resolution waterproof camera he called a "snake-cam."

All he had to do now was find a Burmese python.

Bullard had been invited, along with just about anyone else willing to pay a $25 fee, to plunge into swampland and kill the fat, generally docile snakes that have been threatening the Everglades' ecosystem. The Python Challenge, sponsored by the Florida Fish and Wildlife Conservation Commission, offered cash prizes: $1, 000 for the longest Burmese python and $1, 500 for the most pythons captured and killed.

Alas, estimates of the Burmese python population of South Florida range from tens of thousands to hundreds of thousands. The point of the first-time contest was not to kill every last python but to raise public awareness of the need to eliminate them. They are an invasive, fast-breeding species that crushes and eats all manner of native birds and other animals, including alligators, bobcats, deer, raccoons and possums.

Most of the tan-and-brown-mottled Burmese pythons have been released into the wild since the 1980s by owners weary of caring for pets that can grow up to 26 feet long and as thick as a small tree. Other pythons escaped when Hurricane Andrew destroyed pet-breeding facilities in 1992. The snakes kill by constriction and are usually not a threat to humans.

Bullard, 40, knows Burmese pythons. He's caught more than 30 of them in the two years he's run an animal removal service - the biggest one 13 feet. He doesn't kill the ones he removes; he bags them and donates them to reptile centers. His business motto, "Saving wildlife and people, " is printed on his pickup along with an alligator logo and a "Got Ammo?" bumper sticker.

"I didn't find them. They found me, " he said. They had slithered toward him on a dirt path.

Bullard held them down with his tongs and, with two quick thwacks of his machete, hacked off their heads.

(The contest website recommends a gun or a captive bolt, the sinister cow-killing weapon brandished by the psycho killer in "No Country for Old Men." Decapitation is OK too, according to the rules, as long as it "results in immediate loss of consciousness and destruction of the brain.")

Bullard recorded the GPS position of his python kills and photographed them, as required. He delivered the heads and bodies to an approved drop-off station. He declined the contest's offer to return the python hides to him. Too small to bother with, he said.

On the challenge's final weekend, he set off to find something more substantial. It was late afternoon on a warm, steamy day when Bullard drove back to the Taylor reserve.

There, Bullard ran into competition - four men who had been combing the reserve for two days, hunting knives at the ready, sleeping in their cars and surviving on sandwiches and cereal. They offered a dismal status report: They hadn't seen a single python.

Burmese Python at a Park