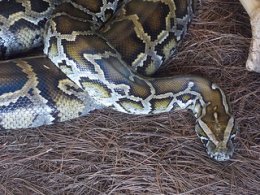 Florida is the land of invasive species. Because of our status as a center for the importing of exotic pets and houseplants from overseas, and our neo-tropical climate, we have been invaded by everything from kudzu plants to green iguanas. And the grand-daddy of them all, the most famous and best-known of all Florida’s invasives, is the Burmese Python.

The Burmese Python (Python bivittatus) is a large constrictor snake found in the rainforests of southeast Asia, usually near water. Some authorities consider it a geographical subspecies of the very similar Indian Python (Python molurus). At measured lengths near 20 feet, it is the third-largest snake in the world–only the Reticulated Python and the Green Anaconda are larger. The largest known Burmese Python was a resident of the Serpent Safari reptile park in Illinois–“Baby” measured 18 feet 10 inches long and was, sadly, grossly obese, weighing 403 pounds. A typical Burmese Python adult will measure around 14 feet and weigh around 90 pounds (the females are larger than the males). Males can be recognized by the pair of clawlike breeding spurs located on either side of their vent–all that remains of their hind legs.

Like all pythons, Burmese are egg-layers. The females lay clutches of 20-30 oblong eggs, with soft leathery shells. Unlike most snakes, however, which simply lay their eggs and forget them, the pythons provide maternal care– the female curls her body around the clutch and uses muscular contractions to raise her body temperature above that of the surrounding air, incubating the eggs. The youngsters are about two feet long when they emerge, ready to wander off and live on their own. Under good conditions, they can reach eight feet in length by their first birthday, and reach their adult size of 12-14 feet in 2-3 years. Like all reptiles, they never stop growing, though their growth rate gets slower and slower with age. Burmese pythons can live 25-30 years.

Pythons are ambush predators, lying in wait along watercourses and jungle paths for prey to wander within reach. They have no venom, but kill their prey through constriction, seizing the prey with their recurved teeth and wrapping their body coils around it. Contrary to popular belief, they do not crush their prey to death and do not break any bones; instead, they exert a steady pressure that prevents the prey’s chest cavity from expanding, preventing it from inhaling and thereby suffocating it.

Despite their huge size, Burmese pythons were readily available in the pet trade throughout the 1990’s and 2000’s–every pet shop that specialized in reptiles was likely to have a number of hatchling Burmese Pythons for sale. Their bright color patterns and their generally docile dispositions made them popular pets, and they were captive-bred in a variety of different color patterns and strains, including albino.