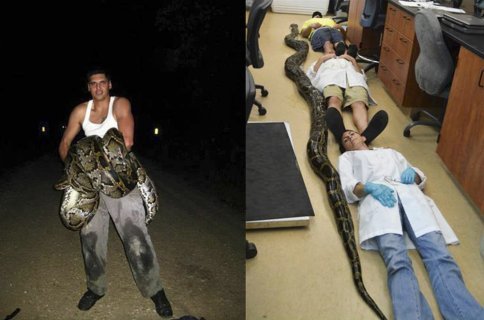 The latest in Florida's crusade against big snakes: A man grabbed a huge Burmese python, it fought back, his friends helped, and the snake ended up dead. At more than 18 feet, the python is a record for Florida, though it falls more than ten feet short of the maximum size claimed for this species.
As mentioned in the article, scientists have been claiming huge populations for this and other invasive species of pythons and boas. The state of Florida and the Federal government have identified this as a serious problem. At least one study claims the snakes have decimated native wildlife. But the methodology of that study has been called into question. For more than a decade, we've been hearing reports of alligator populations threatened by pythons. Yet, as I documented in an earlier post, alligators more often eat pythons than the other way around. A recent month-long hunt offered prizes for citizens willing to kill the snakes. It yielded only 68 kills. In short, the problem gets big press, but the real harm has been hard to prove. "A Miami man has caught and killed the longest Burmese python ever captured in Florida: 18 feet, 8 inches. The python was a 128-pound female that was not carrying eggs, according to University of Florida scientists who examined the snake. The previous record length for a Burmese python captured in the wild in Florida was 17 feet, 7 inches.On May 11, Jason Leon was riding late at night in a rural area of southeast Miami-Dade County when he and his passenger spotted the python. About 3 feet of the snake was sticking out of the roadside brush. Leon stopped his car, grabbed the snake behind its head and started dragging it out of the brush. When the snake began to wrap itself around his leg, he called for assistance from others and then used a knife to kill the snake. Leon once owned Burmese pythons as pets and has experience handling this nonvenomous constrictor species."
Source: deadlykingdom.blogspot.com