Biggest Burmese Python Was Quite at Home in Florida Everglades 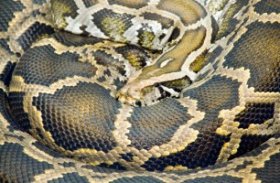 The biggest Burmese python snake ever found has been found in the Florida Everglades.The snake is a native of Southeast Asia and is one of Florida's new and unwelcome residents.

It was introduced to Florida by the exotic pet trade three decades ago and is now one of the region's deadliest and most competitive predators.

At 17 feet, 7 inches (5.3 meters) in length, it is the largest snake of its kind found in the state and it was carrying a record 87 eggs. Scientists say the finding highlights how dangerously comfortable the invasive species has become in its new home.

"This thing is monstrous, it's about a foot wide, " said Kenneth Krysko, of the Florida Museum of Natural History at the University of Florida.

"It means these snakes are surviving a long time in the wild, there's nothing stopping them and the native wildlife are in trouble."