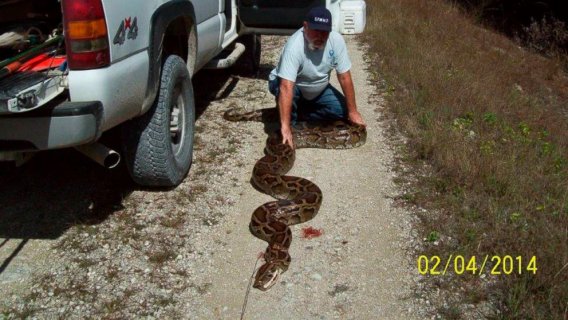 New research confirms that Burmese pythons, dumped in Everglades National Park in Florida and now reproducing, are wiping out the mammals that have historically populated the park, the Miami Herald reported Thursday (March 19). Scientists released 26 marsh rabbits fitted with tracking devices in the park in September 2012 and watched as they settled in - until warmer weather hit and the rabbits began to disappear - the report says.

In the study published Wednesday in The Royal Society Proceedings B, which publishes peer-reviewed biological studies, a team of scientists documented deaths of 17 of the rabbits - with the tracking devices leading them to pythons in 16 of the cases. The 17th had been regurgitated by a python, testing showed.

The study backed up the findings of 2012 research that concluded the pythons have altered the mammal make-up of the 1.5-million-acre park since 2000. The most severe declines have occurred in the southern parts of the park, where the pythons have been established for the longest time, and have included an almost complete disappearance of raccoons, rabbits and opossoms, according to the 2012 report.

The Burmese python, yellow anaconda and northern and southern African pythons were banned from importation as injurious wildlife by the U.S. Fish & Wildlife Service in 2012. On March 6, the service added the reticulated python, DeSchauensee's anaconda, green anaconda and Beni anaconda to that list.

U.S. Geological Survey researchers captured a record-breaking, 17-feet, 7-inch, Burmese python and collected its 87 eggs in Everglades National Park in the spring of 2012. The snake was found when the researchers tracked a male python with a transmitter. They outfitted the female snake with two transmitters and a motion-sensing device and released it into the wild. The snake was tracked for 38 days before being removed and killed. Information gathered from the tracking devices allow scientists to better understand how the pythons are surviving in the Everglades. Video producer, Catherine Puckett, U.S. Geological Survey
Source: www.nola.com