How To Hunt A Burmese Python

Pretty much anyone with a gun and a distaste for giant snakes has been invited to participate in Florida's first "Python Challenge." It's a month-long competition that offers a bounty for capturing and killing Burmese pythons, a non-native snake that is wreaking havoc in the Everglades by eating all of the native animals.

Nearly 700 people from more than 30 states have registered for the competition, which starts tomorrow. 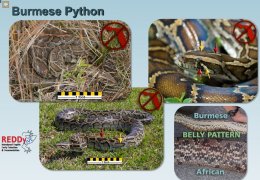 We're not surprised. It's fairly simple to jump onto the python-killing train. All you need is $25 to enter and to take a light online training course. Neither a python-hunting license nor in-person training is required. The reward is also enticing. A cash prize of $1, 500 will be awarded to the lucky murderer who slaughters the most pythons, and $1, 000 for the longest one.

For the most part, it involves looking at pictures of the Burmese python and pictures of native snakes in order to identify the difference. 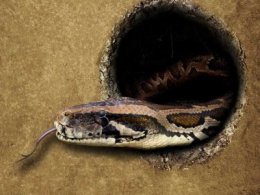 The Burmese python and other exotic snakes are large, shiny and boldly-marked.

Here's an example from the presentation:

The course also tells us to bring a GPS unit (for locating our victim), binoculars, a camera, a flashlight (for spotting), and a measuring tape (for gathering data).

To find the snakes, we should look in canals and banks — this is where Burmese pythons enjoy swimming and basking. Road shoulders are also common hanging grounds for the large snake.

And what do we do once we've closed in on our Python? Apparently we can just latch onto it with our bare, dirt-covered hands like the guy in this picture below.