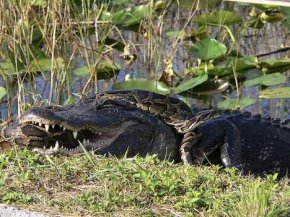 When the news broke around 2000 that giant Burmese pythons were invading the Florida Everglades, it sounded like a practical joke. However, the real impact of the invasion has now been evaluated by scientists, and the are anything but comical.

According to a paper published in the Proceedings of the National Academy of Sciences, marsh rabbits and foxes are no longer found in areas where the pythons have set up camp. Raccoons are down 99.3%, opposums are down 98.9%, and white-tailed deer are down 94.1%.

The disturbing info doesn’t stop there, either. Gordon Rodda, an invasive species specialist with the U.S. Geological Survey, published research in 2008 noting that these pythons have the potential to expand across the whole southern portion of the United States. That’s unsettling. 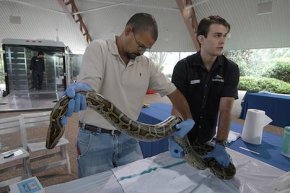 Burmese pythons can grow up to 16 feet long and weigh as much as 150 pounds. They are native to Southeast Asia, but release of pet pythons, both deliberate and accidental, have led to the snakes making themselves at home. Go figure, humans are event at fault for THIS.

While it can’t be said conclusively that the decline is due to python activity, the evidence is certainly there. “Last October, we found a 15-foot snake with an 80-pound doe inside it, ” said Michael Dorcas, lead author on the paper and professor of biology at Davidson College in Davidson, N.C. He also notes that pythons are not a danger to humans so there isn’t a need to worry in that sense, as the only attacks on humans were with snakes kept as in-home pets. However, they will eat your pets, so keep an eye on your animals if you’re local.

If you’re wondering what can be done, there’s not a whole lot as yet, since these snakes are incredibly secretive and hard to find. The vast wilderness in southern Florida makes suppression and extermination incredibly difficult, so it could be some time before animal control figures out how to gain control of the reckless snakes.

Invasive Species: From Pets to Monsters

NATURE | Invasion of the Giant Pythons | Gator vs Python | PBS