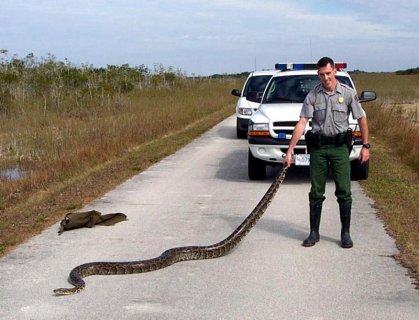 Burmese Pythons Are Taking Over the Everglades

This article (Walsh 2015) discussed a new study published in the journal Proceedings of the Royal Society B (McCleery et al. 2015) that found that widespread presence of invasive Burmese pythons in Everglades National Park is the cause of a drastic decrease in the population of mammals in the park. In order to find out what effect the pythons have on mammals, scientists from various organizations, such as the Florida Fish and Wildlife Conservation Commission, the U.S. Geological Survey, and the University of Florida released 26 marsh rabbits attached with tracking devices into the park. Despite reproducing rapidly and flourishing in the fall and winter, the rabbits began to disappear as the Burmese pythons became more active as the weather got warmer; 77% of the tracked rabbits were found to be eaten by the pythons.

Previous research on the effect of Burmese pythons on mammal populations demonstrated similar results. A study by Dorcas et al. (2012) documented a 99.3%, 98.9%, and 87.5% decrease in the frequency of raccoon, opossum, and bobcat observations, respectively, and ultimately failed to detect any rabbits from 2003 to 2011 after the proliferation of the pythons in Everglades National Park. Furthermore, Holbrook et al. (2011) found out that no mammals were encountered during the five Everglades National Park surveys, where nine individual animals representing three mammal species were counted over the nine surveys.

In conclusion, the Time piece accurately described the study, although it could have been more detailed and informative.