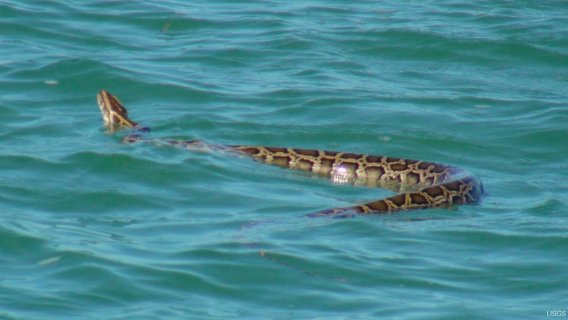 A sneaky snake: Teams hunt for rock pythons in Everglades

Edward Mercer, a nonnative wildlife technician with the Florida Fish and Wildlife Conservation Commission, holds a Burmese python, Thursday, Jan. 29, 2015, in Miami. The invasive Burmese python has proliferated in the Everglades, and officials are now working to keep another species, the Northern African python, from slithering into the same territory. (AP Photo/Lynne Sladky)

For all the danger posed to Florida's Everglades by invasive Burmese pythons, there's one thing researchers don't want to know: how they would interact with another python species that threatens to move into the same territory.

The Florida Fish and Wildlife Conservation Commission is racing to keep northern African pythons, also known as rock pythons, from slithering into the Everglades. So far, just a few dozen rock pythons have been found in suburban Miami, not in the wild wetlands where their Burmese cousins thrive in large numbers.

That's still enough to scare wildlife officials into hiring a specialist over the last year to patrol weekly for rock pythons in the hopes of eradicating them before they join the other invasive species threatening restoration efforts in the Everglades.

Both snakes are non-venomous and can grow to 20 feet long in their native habitats. Wildlife officials say rock pythons captured here have averaged 10 feet in length; the longest Burmese python caught in Florida was over 18 feet long. Each has a splotchy, black-and-tan pattern, though the Burmese pythons' markings are more defined and resemble the spots of a giraffe. There's no good population estimate for either species, wildlife officials say, but it's generally believed that tens of thousands of Burmese pythons live in the Everglades. Both snake populations likely originated from pets that either escaped or were illegally dumped by their owners.

Tessie Offner, a nonnative wildlife biologist with the Florida Fish and Wildlife Conservation Commission, walks through brush while doing a survey of the Northern African python, Thursday, Jan. 29, 2015, in Miami. For the last five years, wildlife authorities from multiple agencies have raced to keep the northern African python, also known as the rock python, from spreading beyond a small colony in western Miami-Dade County. (AP Photo/Lynne Sladky)

Last year, 141 Burmese pythons were removed from 1.5 million-acre Everglades National Park. Since 2001, about 30 rock pythons have been removed from a 6-square-mile suburban area west of Miami. Last year, officials found just one rock python, which was run over by a state Department of Transportation lawn mower in August. "Just like Burmese pythons, we know they're very hard to find. We know it's going to take a lot of surveys of finding none before we're able to say that we were successful, " said Jenny Ketterlin Eckles, a wildlife commission biologist.

Biggest Burmese Python Ever Caught in Florida Was Carrying ...

@IBLiS: please remember that people releasing their burmese pythons en masse in florida is what caused their alien invasion, too Wed, 3 June 2015 05:59 PM