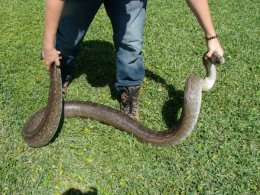 The Northern African Python, also called an African rock python or simply a rock python, continues to threaten the Everglades, prompting the Florida Fish and Wildlife Conservation Commission to increase efforts at locating and removing the invasive snake before its population grows too big to handle.

So far, rock pythons are believed to be confined to a single county. This has made seeking out the invasive species easier for the FWC and its partners but they can't be complacent unless they want another snake population rivaling the Burmese python's. To ensure that none have ventured beyond the Bird Drive Recharge Area in the western portion of the Miami-Dade County, the FWC is scheduling surveys, taking advantage of the weather.

This would make spotting rock pythons easier because they would be more out in the open.

In their native land Africa, rock pythons can grow up to 20 feet in length. In Florida, they are smaller at an average of 10 feet in length but still pose a great threat to local wildlife.

Aside from the Everglades National Park, the FWC and its partners will also be surveying parcels of land that have not been searched before. They will also be reaching out to landowners and residents in the area to facilitate canvassing.

It's still unclear how rock pythons got to Florida but it is possible that some were dumped illegally in the state or accidentally escaped from their owners. They were first spotted in 2001 but surveillance and removal efforts didn't start until 2009.

The FWC listed rock pythons as a conditional species in 2010, making it illegal for any individual to acquire the snake in Florida for personal use. The U.S. Fish and Wildlife Service listed the snake as an injurious reptile species in 2012, making it illegal to transport the rock python across state borders. Rock pythons also can't be imported into the United States without the necessary permits.

The hunt for the North African rock python in the Florida ...