Receive the latest news updates in your inbox

State biologists are concerned that the aggressive rock python might be the latest invasive species to become established in the Everglades and elsewhere in South Florida. NBC 6's Laura Rodriguez reports. (Published Friday, Dec 20, 2013)

State biologists are concerned that the aggressive rock python might be the latest invasive species to become established in the Everglades and elsewhere in South Florida.
Wildlife officials planned Friday to do a walking survey just west of Miami to see how many of the big snakes might be living there. Florida is already grappling with Burmese pythons in the Everglades, where they are being blamed for sharp decreases in many native species.

"This is another species of snakes that gets large like Burmese pythons and they are known to be generalist so they eat a variety of wildlife, " said Jenny Ketterlin-Eckles, a wildlife biologist. 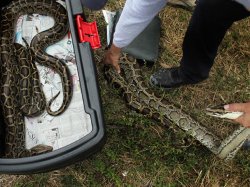 Rock pythons can grow to about 16 feet and are the largest snakes in Africa. Biologists say they are among the world's most aggressive snakes and will eat almost anything they can swallow.
The survey Friday is part of a state effort to eradicate the snakes from South Florida.

Officials say they are increasing their efforts and are expanding search areas and canvassing neighborhoods during the fall and winter season, when the pythons are more likely to be encountered.

A 14-foot python was discovered Friday in the Everglades. The female python was shot and killed and now belongs to the owner of Exotic Love of Fashions, a shop for accessories made of reptile leather. (Published Saturday, Nov 30, 2013)

"They don't belong here in Florida, and any non-native species that's introduced into the ecosystem causes havoc for the animals that are here, " said Jorge Pino, spokesperson for Florida Fish and Wildlife Conservation Commission.

African rock pythons are often found under piles of trees and also hide in crevices near levy's. This snake is non-venomous, but can be dangerous.

"We did have an incident not too long ago where an African rock python was found clenching onto, squeezing a husky dog, " said Pino.