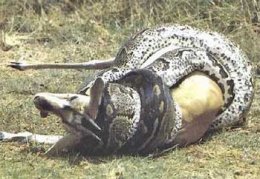 It is possible to get python pictures on a safari trip even though these massive snakes are pretty shy and hard to find because they disappear as soon as they enter long grass.

Your best bet will be to find one crossing the road or feeding if you are really lucky but that is normally a pretty gruesome affair. They disable their prey by crushing it with their bodies to cause suffocation and then swallow it whole.

This python is the largest snake found on the African continent and the third largest in the world, growing to be up to 25 feet (6.5m) long and weighing in at over 200 lbs (90kg).

It will feed on gazelle, birds, rodents, lizards, warthog, baby crocodiles and anything else in that size range that it is able to ambush. 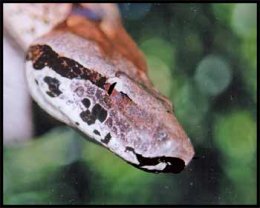 It's non venomous so it relies on stealth to get close and then latches onto prey with its teeth to coil around the victims body to prevent escape.

Attacks on man are rare because humans are outside the normal size range for prey. After a large meal the snake will take a week or more to digest the contents of its stomach and at this time it is very vulnerable to other predators because it becomes very lethargic and less mobile.

The Boa family of snakes are not pythons but it also kills its prey by constricting and three species are found on the island of Madagascar (Madagascar ground boa, Madagascar tree boa and Dumeril's boa).

In contrast to the pythons they give birth to live young and not eggs, have one less bone in their skull and less teeth overall.

They have been known to hunt bats by waiting at the mouth of a cave and knocking them out of the air as they fly past.