Florida FWC Hunts Down Invasive Rock Pythons Before They Spread 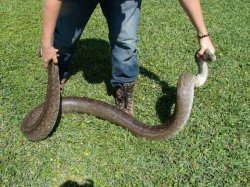 Pythons are invading Florida and now, the Florida Fish and Wildlife Conservation Commission (FWC) are increasing efforts to remove these snakes before they can spread further. (Photo : Florida FWS)

Pythons are invading Florida and now, the Florida Fish and Wildlife Conservation Commission (FWC) are increasing efforts to remove these snakes before they can spread further. Known as the rock python or the Northern African python, this snake has the potential to wreak havoc on native ecosystems.

"Unlike the Burmese python in Florida, the Northern African python population is thought to be confined to a small area in a single county, " said Jenn Ketterlin Eckles, FWC biologist, in a news release. "Focused efforts by the FWC and partners to locate and remove these invasive snakes could prevent the spread of this species into natural areas and inform management actions to address the Burmese python population."

Scientists aren't sure exactly how the rock python was introduced into the ecosystem. The first sighting was in 2001; surveillance and removal of this snake has been underway since 2009. The average size of these snakes found in Florida is about 10 feet in length, which makes them a threat to native wildlife. They can actually grow up to a staggering 20 feet in length in their native range.

Currently, rock pythons have yet to be documented within the Florida Everglades National Park, a biodiverse and rich habitat that supports rare species of birds. And that's why biologists and conservationists are acting now to make sure that this remains the case. Volunteers are working to prevent these snakes from expanding their range, and participants are surveying land parcels that have not yet been searched in an effort to document these snakes.