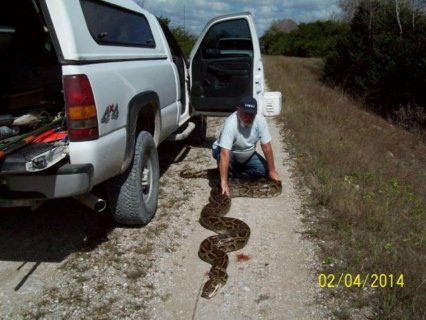 South Florida wildlife officials have struggled for years with tens of thousands of Burmese pythons – imported to Florida as pets – that have taken up what looks like permanent residence in Everglades National Park and other areas of the state.

At full maturity, a Burmese python routinely reaches lengths of 12 feet or more. Twenty-footers weighing 250 pounds are not unheard-of. The pythons are prodigious breeders, with voracious appetites to match.

They are believed to have eaten their way through the Everglades, bringing about startling changes in the ecosystem. Some mammals native to those marshes, like foxes and rabbits, seem to have disappeared, researchers say. Other species — among them raccoons, deer, opossums and bobcats — are close to being wiped out.

While the python is more of a direct threat to native birds and animals than to people, attacks on humans are not unknown.