150,000 Burmese pythons in the Everglades. Nothing to be afraid of. 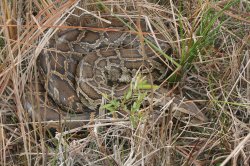 In the spirit of the day, Americans might want to consider the findings of a federal study that says visitors shouldn’t avoid Everglades National Park, south of Miami, because some 150, 000 Burmese pythons have made a home there.

According to the study by U.S. Geological Survey and National Park Service researchers, pythons, among the world’s largest snakes, tend not to bite… humans. Everything else, from rats to storks to American alligators, is fair game.

More than a million people visit the park every year, the study says, and not one bite has been reported. Visitors venture out in canoes, on foot, and along trails – everywhere pythons have been found on the swampy terrain.

To clarify, there have been no attacks on the average visitor. For biologists who study the swamp’s waters, there’s a different story. 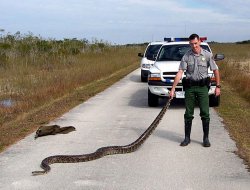 The strikes appear to have been five cases of mistaken identity, Reed said. Realizing they weren’t lunging at a deer, or an opossum, or a bobcat or any of 20 species of birds that have been pulled out of the stomachs of dead serpents during necropsies, the pythons backed down.

More than likely, it was “aborted feeding behavior, ” Reed said. While it might be a little hard to believe pythons are more willing to tangle with an alligator than a human, Reed stressed that they “rely on being secretive and evading detection as their primary means of avoiding interactions with people, and typically don’t strike until provoked.”

Reed said the workers said they didn’t see the snakes, and concluded in his professional opinion that the attacks were “related to feeding and not defense.” He didn’t say whether the scientists were scared stiff by the encounter.

The study is important because a few people have indicated that they’re afraid to visit one of the world’s greatest swamps because of the invasive snakes from South America and India.

Pythons on the prowl Snakes take over Florida Everglades