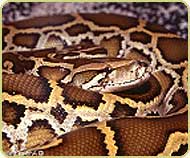 Description
The Burmese python is the largest subspecies of the Indian python and one of the six largest snakes in the world. Lengths of more than 15 feet (4.6 m) are common, and they may exceed 22 feet (6.7 m) in captivity, however the average is about 16 feet (4.9 m) in length. Females are the larger of the two sexes and often have different coloration and a smaller head relative to the body.

The body of a Burmese python is longer and thinner than the anaconda’s. Because the body is long, the organs are also long. Snakes usually have only one lung, but the python has two, one of which is considerably smaller than the other. Basic body color may be pale tan, yellowish-brown, or gray. They have large, reddish blotches outlined in cream or gold.

Pythons are constrictors, so they don’t have fangs. They do have back curving teeth that grab prey and don’t let it escape.

Burmese pythons live in rainforests near streams although they survive in a variety of habitats, such as grasslands, swamps, marshes, and rocky foothills. Populations are dependent upon a permanent source of water.

Diet in the Wild
Burmese pythons prey upon mammals, birds, and reptiles of appropriate size. The presence of domestic fowl and pigs attracts them to agricultural developments.

In the wild, snakes do not eat every day. Burmese pythons spend their mornings soaking up the sun’s warmth, enabling them to move around to look for food. If they are successful in their hunt for prey and lucky enough to eat, they spend the next several days or weeks keeping warm enough to digest their meal. The prey is swallowed whole. The jaws separate and allow the snake to take in an animal four to five times as wide as its head.