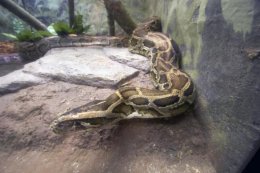 Burmese pythons have been introduced into the Everglades in South Florida. Many were pets accidentally released or intentionally abandoned when they grew too big. In the wild, they are proliferating; preying on and competing with native species, some as large as alligators. Biologists are working to remove them via radio tracking, locator dogs and hunting.

From birth to death

Burmese pythons, like many other reptiles, keep growing their entire life. Many start in the pet trade as small snakes two to three feet long. In several years they may grow to more than 15 feet long and weigh more than 100 pounds.