The Copenhagen Zoo Kills Marius, the Reticulated Giraffe, and

Two alarming animal things happened over the weekend, and the conflation of the dual mendacities against human nature leads us to recognize we are not really a wholly civilized world where the weaker among us in the animal world are cared for and protected as we expect them to care for us.

First, Marius, a two-year-old Reticulated Giraffe, was killed by the Copenhagen Zoo — the very entity vested and sworn to protect him — and he was fed to lions because Marius’ genetic stream wasn’t special enough to earn continued living:

Administrators said they had decided to kill Marius, who was in good health, because his genes were well represented among the captive giraffe population in European zoos. But that explanation did not satisfy animal rights activists who had mounted a furious last-minute campaign to save him. 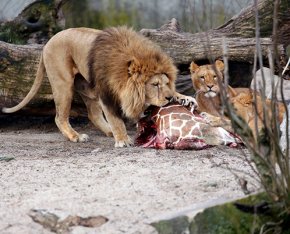 I understand animal lives and human lives are provided various niches of importance and meaning, and the more special you are, the better chance you have of propagating yourself into the future; but I think the universal outrage over Marius’ untimely death is the tone and method in which the zoo decided to kill him and leave him for dead.

If the zoo really wanted a spectacle, why not just put Marius alive in the lion’s den and let nature take its course? Isn’t that more true to the nature of nature to let nature attack instead of giving Marius a shotgun blast to the head and dumping his carcass in a pen?

Why take the easy way out with gunpowder? Let the lions have at him alive, and invite all the children in Copenhagen to watch the spectacle live from a ringside seat. Make sure to give them towels to wipe away the blood and tissues to dab at their young tears.

I can tell you I wouldn’t want to give much support to the Copenhagen Zookeepers who killed Marius. They’re in it for the easiest path that won’t lessen their day, and not the proper, if not rougher, higher moral road. It’s disappointing that Marius’ keepers believe “dominion” means “kill.”

In New York City, the cruelty news doesn’t get much better as cops broke up a Cockfighting ring of 3, 000 animals in Jamaica, Queens:

Five people were charged after investigators raided a bloody late-night cockfight in the squalid basement of a vacant Queens storefront where birds waiting for later rounds were kept in sacks hanging from the walls, officials said on Sunday.

Paul catches a python with his bear teeth