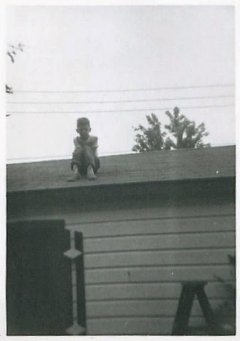 I don't like heights. I wasn't always this way, my fingers didn't always go numb at the sight of a long drop, my testicles didn't always try to crawl back up into my belly when confronted by the possibility of plunging to my death. Back when I was a kid I used to climb on top of everything. My favorite was our garage. My sister Sue and I would climb up there and throw rocks into the neighbor's yard just because it was fun to see him get pissed off. I even used to jump off of that garage into the grass. I had no fear until one day it dawned on me that I could fall and get hurt badly. The problem was that this realization happened while I was on the roof of the garage. I couldn't get back down, I was too terrified to climb back down. Like good siblings, my brother and sister made fun of me while I cowered up there on the roof. My brother even memorialized it in this photo that he took.


Forty six years ago two of my cousins and I took a road trip across the United States. We were all around nineteen years old and wanted to see California. Because there were three of us we intended to drive non-stop, over two thousand miles, switching off drivers while one of us slept in the back of the giant station wagon we were driving. Even at the age of nineteen all that driving took its toll. Somewhere around Flagstaff, Arizona we realized that we all needed rest, so we turned north and drove to Grand Canyon National Park. Our plan was to pull off the road that wound through the park and all stretch out in the car to get some sleep. 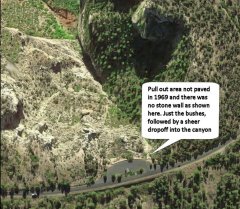 Surprisingly, back in 1969 that was allowed by the park service. I'm not so sure they let you do that anymore. So in the pitch blackness of the high desert night, we found a nice little place to pull off the road. There were no lights anywhere. As soon as the car's headlights were extinguished complete darkness enveloped us. I remember waking up in the middle of the night thinking that I wanted to take a piss, but I decided not to get out of the car and go behind one of the bushes nearby. There were noises out there, animal noises, and I chose to tough it out until the dawn. When the first light of day broke, I broke for the bushes. I had to pee badly. To my surprise, immediately behind those bushes was a four thousand foot drop. I can feel my testicles clambering up inside me just thinking about it.
Source: tinleytime.blogspot.com

@jonathan koffler: Some of the women on the Chinese World Cup team are definitely men... There's just no way those "girls" don't have balls Sat, 6 June 2015 11:19 PM