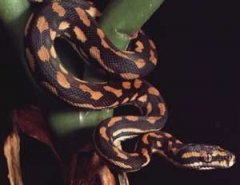 The name carpet python was coined because the pattern of some specimens resemble the patterns of old fashioned carpets.

The carpet python has a noticeably robust body and large head. Unlike its close relative, the diamond python, the colour and pattern vary greatly, as indicated by its scientific subspecies name, variegata. They range from pale to dark brown and olive green to grey or reddish with darker blotches. The 'jungle' carpet python of north Queensland is sometimes brilliantly coloured in black and bright golden-yellow. This pattern acts as superb camouflage for the snake as it lies in ambush for passing prey, either amongst leaf litter on the forest floor or amongst the branches of trees and shrubs.

Found in a number of different habitats across Australia ranging from floodplains and rainforests to open woodlands and rocky mountain ranges. They can also be located in the heathlands of southern Australia as well as inland watercourses and channels of drainage systems. They may be found sheltering in hollow logs, caves or other rock crevices, tree hollows or disused burrows. Carpet pythons are also infamous for making the ceilings of human dwellings their home.

Carpet pythons feed mainly on mammals and birds. Young snakes initially feed on small lizards until they are large enough to catch and consume small rodents and birds.

Carpet pythons are egg layers and produce between 10 and 50 eggs in each clutch, which are laid in late spring or early summer. The female coils around the eggs to incubate them and will 'shiver' to produce extra heat if the eggs become too cold. Incubation lasts around 10-15 weeks.