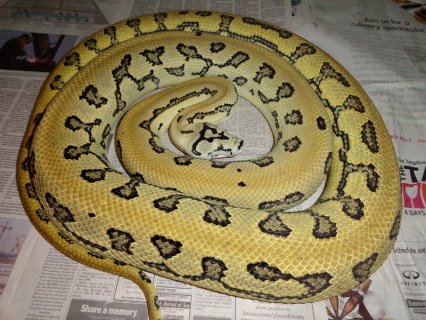 Significance to Humans: Non Venomous
Bites may cause substantial lacerations or punctures.

General description: Large, heavy bodied snake with a highly variable, mottled & blotched pattern and color. Mostly white to cream on the underside. Head is distinct from the neck. Deeply pitted scales (infralabials) along bottom jaw and to a lesser extent the upper jaw (supralabials) with small "granular scattered scales on top of the head. Midbody scales in 40 - 60 rows.

Habitat in SE Qld: Occupies all habitats from rainforest, wet sclerophyll forests and dry woodland through to suburban backyards and the periphery of highly disturbed farmland.

Local distribution: Recorded from all suburbs of the Greater Brisbane region including the inner city with highest densities occurring in leafy suburbs such as The Gap, Chapel Hill, Kenmore and Holland Park.

Around the home: Will utilise all above ground environs such as roof and wall cavities, exposed beams of verandahs and pergolas, sheds and garages. Often resides in the heavy foliage of trees and shrubs. At ground level will utilize dense vegetation, miscellaneous large ground litter such as stored building materials and accumulated garden debris.