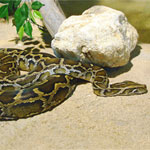 Intro
The Burmese python is a large snake, known for their docile nature. They are great snakes for first time owners and veteran reptile keepers alike. They originate from the forests Burma, Thailand and Vietnam.
Appearance
A Burmese python can reach 13 feet in length once it is fully grown, and can live for 15 or more years if cared for properly. When fully grown, it is important to understand that the python can easily weigh over 200 pounds at 10 feet long. As the Burmese python is growing in popularity, so are the number of morphs and color combinations available like albino and granite.

Handling/Aggression
Burmese pythons are one of the largest snakes you can own, but it is also known to be the most docile and friendly of the python family, right next to the ball python. As long as your treat this species with respect and understanding, you will not have a problem with their temperament. If your snake is over 10-12 feet in length, do not remove it from the cage by yourself simply because of their sheer size and weight. It is best to always have another person around when you are handling your python.

Never grab or even get near a Burmese python without it watching you because it will think of food before it realizes it is your hand in their mouth, and your arm they are wrapping around. When you open the cage for feeding, tap them on the nose with a snake stick so they understand that it is feeding time. Never become lax with your attention because Burmese pythons have a limited ability to reason.

Diet
The diet of a Burmese python will consist of large rodents. When young, they can eat small mice and rats, but as adults they should be eating fully grown rabbits and chickens. A meal should produce a noticeable lump in the python, but it should not be awkward in width. When the python is in between stages of feed, they can be offered multiple items of the smaller prey.

In order for your snake to understand there is food in its enclosure, it must be moving, it must be warmer than the immediate...