Once placed in its own Genus, Chondropython, due to the belief that, unlike most other python species, they did not possess teeth on their premaxilla (small bone at the front middle of the upper jaw). It was later found that most do in fact have teeth in that area, so were again placed into the Genus Morelia.

In recent years, I have heard of DNA findings that show they may be more distantly related to Morelia than originally thought. This could potentially, resurrect Chondropython once again as a Genus, to include the Green Tree Python and the Rough-scaled Python, Morelia carinata. It will be interesting to see how it all shakes down taxonomically in the next few years.

I am a proud Core Member of:

Green Tree Pythons (a.k.a. the Chondro) are a fabulous small species of Python found in Indonesia, Papua New Guinea, and a tiny portion of the Cape York Peninsula in Australia.

My interest in the Green Tree Python - or Chondro as we affectionately call them - dates back almost two decades to my childhood fascination with all things tropical. Today, I have managed to put together an impressive breeding colony of these wonderful Pythons. 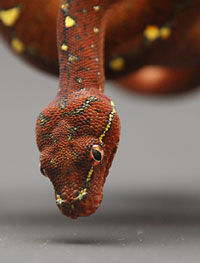 Once thought to be a difficult species only for experienced keepers, we now know that Green Tree Pythons are best kept in captivity like all other python species. Obviously, tweaking some minor husbandry and cage design to suit the needs of this slim, arboreal and charismatic Python!

The baby Green Tree Pythons experience one of the most amazing ontogenic color shifts found in the Snake World. They begin life as a beautiful dark maroon, red, or bright yellow color with wonderful orange, black or white dorsal markings. Between the age of 6-18 months, they shift to their permanent adult coloration.

With the introduction of designer animals and selective breeding for color entering the scene, we can include incredible Whites, blues, greens, yellows and blacks among the adult colorations, many specimens exhibiting a combination of all of the above hues... a collage of color!

There is nothing more thrilling than seeing some of Nature's beautiful little red and yellow gems poking their heads out of their pearly white eggs for their first breath of air. In fact, it's nothing short of breathtaking and worth every grey hair!