Turning the ugly, scary and creepy into the beautiful 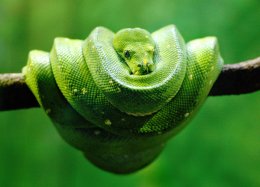 Morelia Viridis: a.k.a. the Green Tree Python. These nonvenomous beauties are notorious for the way they settle in, as it were. They hang saddle-like over branches, drooping coils on either side and resting their head in the center.

The Green Tree Python is often confused with the Emerald Boa. To most who do not know the difference, they are essentially interchangeable. But a side by side comparison can help one to identify a key marking as the different. Click each image below to read the identifying difference.

The Green Tree Python is more likely to be speckled down hit’s ridge, ranging from one here or there to large clusters similiar to the lightening blots on the Boas, though still more distinct as individual markings combined, rather than one large one.

The Emerald Boa has longer lightening bolt like markings across it’s back and ridge.

Both have colors that range extremely close together. This snake, however is a morph. Juveniles between the python and the boa are also very similar. Tree pythons can be born brick red or bright yellow, however Emerald boas are only born in the brick red, there is no yellow coloration in the species. If you’re ever in wonder, and the snake is yellow, it is a python not a boa. 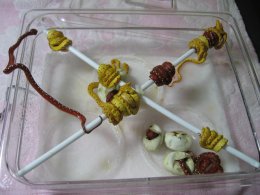 Below you’ll see a side by side comparison on two juvenile tree pythons. Notice their cluster of markings stretch a little farther across their backs, similar to those of the Emerald Boa. Click the images below for some interesting facts about each snake.

The brick red coloration is signature to both Tree Pythons and Emerald Boas. This python has his eye on a meal. Many of his white blotches will fade out as he morphs to his adult color.

This baby boy is the sole survivor of a clutch of 11 total eggs. 9 died, fully formed in egg. His surviving brother passed away weeks later with no signs of illness.