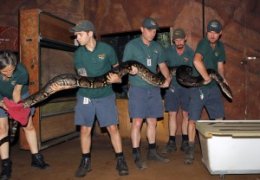 Perth Zoo’s huge 5-metre long reticulated python “Cuddles” is being treated with antibiotics to give him a healthy boost after the giant elderly snake stopped eating last year.

Reticulated pythons are considered the longest snakes in the world, mainly thanks to the females who can grow up to 10 metres long.

Cuddles, as a male, is about 5 metres long but it still took four keepers to lift him out of his exhibit today so he could be examined and given antibiotics by Perth Zoo Chief Vet Dr Simone Vitali.

After his injection, the keepers coiled him into a crate for a 20-minute nebuliser treatment of inhalable anti-bacterial medication to help destroy any bacteria that may be causing him problems.

Dr Vitali said Cuddles, who weighs around 58kg, had been looking peaky for several weeks but the treatment regime was starting to show results and he had recently eaten a small chicken.

She said the reason so many keepers were needed to carry Cuddles was due more to his strength than his size.

“Pythons are like one big ball of muscle, ” she said. “While they are not venomous, they can deliver a severe bite.”

Reticulated pythons eat birds and mammals. Once caught, their prey is constricted and swallowed whole. They are native to South-east Asian rainforests.

Cuddles is thought to be at least 25 years old.

He arrived at Perth Zoo in1997. He was originally kept illegally as a pet and surrendered to Taronga Zoo in NSW, which sent him west to be cared for by Perth Zoo.

The term reticulated means ‘net-like’, referring to the python’s skin pattern. Reticulated pythons have a complicated black net-like pattern that is yellow-edged with large pale spots on the side.

python reticulatus in the garden