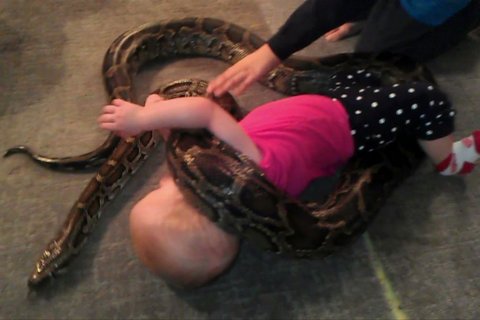 Can you guess what this pet python swallowed by its X-ray?

Winston the woma python seems to have mistaken barbecue utensils for food. Ouch! This poor little guy swallowed a pair of tongs as his owner fed him a dead rat. When Aaron couldn’t get the tongs back from Winston (his grip was way too strong!), he left them in Winston’s cage. Err, bad idea. Later it was discovered that the python had swallowed the BBQ tongs whole.

Dr. Oliver Funnell was the first vet to receive a call from a worried Aaron.

‘Aaron said the snake had swallowed some tongs and initially I was imagining some small forceps or tweezers or something like that. When he arrived, the snake was in a box and I said, ‘Are you sure he swallowed the tongs?’ and Aaron just laughed because when you opened the box it was obvious what the problem was.

‘You could basically see the shape of the tongs, and there’s a small clip that you slide forward to lock them and you could actually see the outline of that through the snake. You could even see the bumps on the end of the tongs’.

These x-rays are just incredible. After taking them, Winston was whisked off to surgery and the vet was able to extract the tongs. Winston is now making a good recovery.