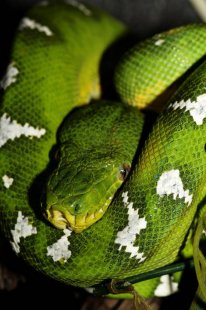 This arboreal beauty received is perhaps one of the most iconic of all snakes and the image of its emerald-green coils draped across a branch is one we are all familiar with. The species is highly sought after in captive collections, however its temperament and care requirements make it unsuitable for novice keepers. The name Corallus caninus is very apt, with this species sporting the largest fangs of any non-venomous snake. It has been suggested that these teeth are necessary for grabbing birds. However, contrary to popular belief, this species diet is dominated by mammals rather than birds.

This species looks remarkably similar to the green tree python (Morelia viridis), though the two are not related and inhabit different continents. This is an excellent example of convergent evolution. A phenomenon whereby two species subjected to similar evolutionary pressures develop similar adaptations to that environment. In this case, both species are arboreal snakes that kill their prey by asphyxiation. As both are arboreal, both have evolved a green colouration to camouflage them in the trees. 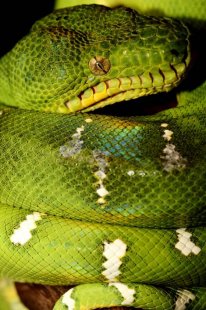 Equally they both have countershading on their bodies so that when viewed from below, they are harder to spot against the bright sky. Both have heat pits in their face to facilitate hunting of prey in dense canopy and they both utilise the same hunting posture. The two species are superficially so similar that most people would have trouble differentiating between them in a side by side comparison.

This species is ovovivparous, a form of live birth whereby the mother retains the eggs until they have hatched, giving birth to live young. It differs from regular viviparity, where there is a placental connection between the mother and the developing young. Young emerald tree boas do not display the same green colouration as adults. They start off in striking shades of red or orange and display an ontogenetic shift towards the green colouration after about 9 months.