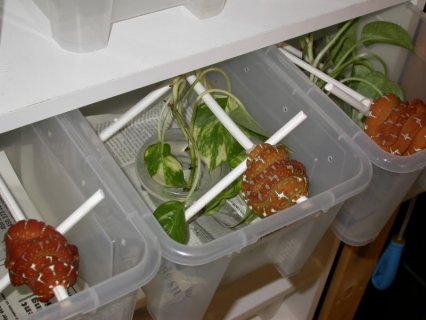 This species is found in New Guinea, various islands in Indonesia, and the northern tip of Australia (Cape York).

This completely arboreal species is found in tropical rainforests, monsoon forests, dense thickets of bamboo or vines and forest margins that contain bushes and shrubs.

What Does It Eat?

In the wild: Tree lizards, small mammals as well as other small arboreal vertebrates.
At the zoo: Rats, mice.

Green tree pythons are solitary except during mating.

Green tree pythons breed in late fall and winter months. A mating pair typically copulates several times over a period of two months. Ovulation in the female lasts eight to 24 hours and can be observed as mid-body swelling that suddenly appears. The female deposits a clutch of six to 30 fertilized eggs often in the hollow of a tree. The female then coils around the eggs to incubate them until they hatch after 39-65 days. The hatchlings are 11-14 inches (280-350 mm) long and weigh 0.2-0.3 oz (8-10 g). Newborn snakes are on their own shortly after hatching and receive no further parental care. The hatchlings range in color from bright yellow to brick red and change to the adult green in 6-12 months. Lifespan in the wild is about 12 years.

Can You See Me Now?

The vivid emerald green coloration and disruptive pattern of spots and stripes provides camouflage for these highly arboreal snakes as they rest or move through the dense vegetation in the trees. When resting, they are virtually invisible – a useful adaptation for these patient predators.

Just Hanging Around Waiting for Dinner

The green tree python adopts a characteristic pose with one or two coils looped around a branch forming a sort of saddle with its head resting in the middle of the coils. The snake may curl its prehensile tail around the branch to serve as an anchor when it strikes out at passing prey or it may use the black tipped tail as a lure to draw prey in closer. These snakes are constrictors. They coil their body around prey and each time the victim exhales, the snake tightens the coils eventually suffocating the prey animal. The snake then swallows the prey headfirst.

Taking the eggs from a Green Tree Python. (Sapphire ...