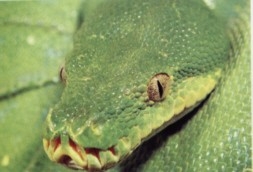 The end of the tail of the green tree python is a different colour from the rest of the snake and is used as a lure to attract potential food. It is held in front of the snake's head and wriggled to resemble a writhing worm.

An unmistakable arboreal or tree-dwelling python, the adult green tree python is emerald green in colour with a yellowish belly. Occasional specimens also have small white markings along the back. Hatchlings on the other hand, are quite different, emerging from the egg a bright sulphur yellow or sometimes reddish-orange, changing into the adult colouration after 1-2 years. Green pythons are relatively short, stout-bodied snakes rarely exceeding 1.5-1.8m in length. Like all pythons they are non-venomous bat are armed with an impressive set of long recurved teeth to enable them to maintain a grip on their struggling prey amongst the branches.

In Australia the species is restricted to the rainforests of eastern Cape York Peninsula in far north Queensland. It is also widely distributed in Papua New Guinea and Irian Jaya.

Most of the diet comprises small mammals and birds. Ground-dwelling rodents are a favourite prey, the snakes lying in wait on a branch a metre or so from the ground grabbing the unsuspecting animals as they pass below. Juvenile snakes feed mostly on small lizards and frogs.

Female green tree pythons locate a suitable tree hollow in which to lay their clutch of 8-25 eggs. Once produced, she will wrap herself around them to maintain the correct incubation temperature until they hatch around 6-8 weeks later.