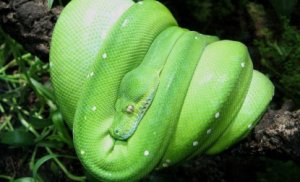 Facts about this animal

This is an arboreal python, with a length of 1, 5 - 1, 8 m. It has a slender, laterally compressed body. Its head is diamond shaped and as in other pythons, the head scales are irregular, numerous and finely granular. The head also is much wider than and appears disproportional to the width of the body They have three thermosensory pits wirthin the upper and five to seven within the lower labials. These thermosensory (heat sensitive) pits help them notice changes in temperature, with which they are able to detect infra-red heat from warm-blooded prey. Their pupil is vertical. Adult green tree pythons have – irrespective of where they come from – different colours and patterns. There exist brilliant leaf-green specimens, but also individuals with yellow-green spots and even blue ones. Often, they are distinguished by a broken, vertebral stripe of white or yellow that runs down their back. Also, there may be flecks of blue, white, and yellow scattered over the body. This color pattern is a helpful tool in minimizing predation, as they tend to blend well with trees and bushes in which they rest. The underside is cream-white to yellow. Young animals are bright yellow or red, but also brick-red or brow-red with broken stripes and spots. They change colours at 6 to 12 months. Adults have a strong dentition with teeth up to 2 cm. That is the reason in addition to their particular position when resting in trees (see below) for the belief that birds – held fast with these long teeth - would be the main part of their prey. Indeed green tree pythons have a particular way of resting in the branches of trees: they loop a coil or two over the horizontal branches in a saddle position and place their head in the middle. And indeed C. viridis have a very interesting, confirmed method of luring their food to them: While lying very still on a branch they dangle their tail. When the prey, curious about the wiggling tail, gets close enough, they strike. Prey is captured by holding onto a branch using the prehensile tail and striking out from an s-shape position. But although they spend almost their entire life in the treetops, they are not exclusively tree-dwellers and can on rare occasions also be observed on the ground in particular at night. In fact evidence shows that they actively ground forage at night and sleep during the day. However they do not wander far. Like most snakes also the green tree python remains true to its site as long as there is enough food. Evidence has shown- contrary to belief – that they eat predominantly reptiles and small mammals (including such that live exclusively on ground). Despite many references in the literature, their diet, according to recent findings does not include birds. Though it has been reported to have taken place in all months of the year, the reproductive cycle occurs most frequently in the fall and winter months (September to October). After reaching sexual maturity (app. 2 years) they are looking for a sexual partner. If the female meets several males, several matings are possible with different partners. Copulation occurs when the pelvic spurs, which...