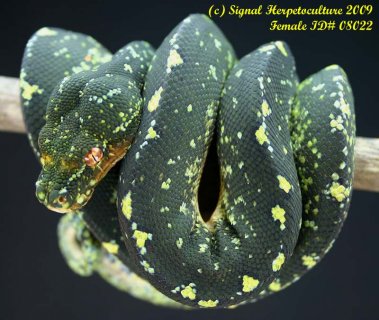 There are four generally recognized geographic races of the Green Tree Python.
These geographic races are distinct from each other, especially the two island forms which tend to enjoy unique traits due to the isolation of their respective gene pools, being located on islands. A Race is defined as a group identified by common morphological traits (appearance) and is not necessarily given subspecific status. Currently, none of the races of GTPs are recognized as a subspecies.
Do not confuse Race with Locality. Locality is defined as a specific location. Locality-specific reptiles, including chondros, are those with verifiable collecting data. No data, no locality - it's that simple. Remember, locality identifications are not made visually, they are the result of having collecting data. Some information about locality-specific GTPs can be found at the bottom of this page.
It is easy to see that in light of these definitions, there are very few true locality chondros, regardless of the claims made by dealers. However, some chondros can be sight-identified as belonging to one of the four described races. Captive bred chondros of mixed ancestry (which is most of them) often show traits from several groups (or none at all). Therefore, care must be exercised when making claims for specific race distinctions.
The designation of "type", as in "Biak-type", is used my most conscientious keepers to designate specimens that conform to a specific phenotype, but in fact do not have any documentation of origin or founder stock.
For an in-depth treatment of the important topics of Race and Locality, including a high quality digital relief map of New Guinea with localities and race boundaries designated, and beautiful color photos of the four race groups. Some brief descriptions are found below.