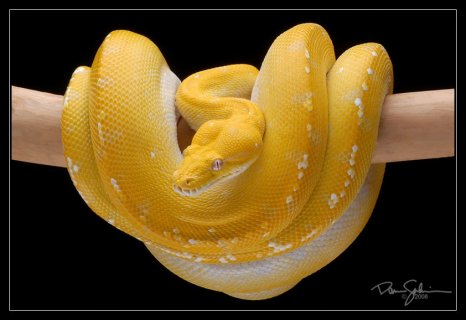 In the Fall of 2003 I was very fortunate enough to obtain a nice group of Chondros from my very good friend Eugene Bessette of Ophiological Services ( OS ). This group represents some of his top progeny from 1998. In that transaction I acquired EB98-92Vi " Golden Mayan Serpent " and her brother EB98-76Vi. Both of these High Yellow creatures came from Eugene's top High Yellow producing Sire EB88-01vi and Dam EB93-51vi Along with them I received a second outstanding female EB98-20Vi " Harvest Gold ". Her pedigree goes back to the very first Chondros Eugene Produced in the late seventies. Her Sire EB86-11vi and Dam EB93-43vi have also produced some outstanding Yellow & Blue chondros. Recently - I also aquired a stud male "Aztec Sun" EB98-01vi another very High Yellow Chondro from Eugenes top yellow producing bloodlines. EB98-01Vi is one of OS's cornerstone offspring of over 30 years of breeding & his sire is a Dr. Van Mierop's VM83-BVi. Along with EB98-01 I aquired his daughter EB04-55vi