Green tree pythons (Morelia viridis) have a long history of captive reproduction, and there are more people breeding them now than ever before. Many of the initial challenges of egg incubation and establishing newborns have been overcome. Still, this is not what most would call an easy species to breed. 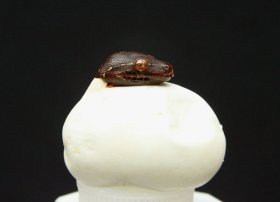 Let a hatchling emerge from its egg at its own pace.

Any breeding program must begin with healthy adult animals. Females should have sufficient body weight to undergo the stress of egg production. Having tracked many females’ follicle development using an ultrasound machine over the past several seasons, we have discovered that young females will first begin growing follicles once they reach a weight of 750 to 800 grams. Females should not be paired until they reach this weight. Under normal captive conditions, most females attain this weight within 3 to 4 years of age. Breeding males can be considerably less in weight because they are typically smaller as adults. Males of only 270 grams have bred successfully.

Normal temperature cycles used for other boa and python species seem to work well with this species, as well. An increase in the nighttime temperature drop into the low-70-degrees-Fahrenheit range, along with a slight decrease of 2 to 4 degrees in the daytime highs for a period of four to eight weeks, should trigger reproductive interest in both sexes. Breeding introductions can begin toward the midpoint and continue to the end of this cycling period.

Pairing animals is best done during daylight hours so as to avoid any accidental bites due to feeding response. Males will normally court and copulate with females that are properly conditioned shortly after dark. Pairs may remain joined for several hours and even into the next morning.

After copulating over a period of several weeks, the female will begin to lose interest in food and her color may change. Her overall color will typically dull, and some animals may take on a predominantly blue coloration. When the ovulation process begins, the female will develop a large, mid-body swelling—this will have the appearance of the female having eaten an excessively large meal. The swelling normally lasts from 12 to 24 hours, and the female will appear uncomfortable and restless. Some females can be good at hiding their ovulation, so careful observation is necessary at this time. Once ovulation has occurred, it will be important to watch for the female’s next shed. That will be a clear indication that egg deposition will occur in two to three weeks.

Once you know the female is gravid, you should provide her with a comfortable place to deposit eggs. This normally means installing a nest box. Our nest boxes measure 8 inches long by 8 inches wide by 12 inches high, and they are mounted mid-level within the enclosure. They can be constructed of wood or plastic. A wide variety of nesting facilities have been used by breeders, including lidded plastic buckets and overturned flower pots. The box should have an entry hole or slot cut into it that is at least 2 to 3 inches in diameter.