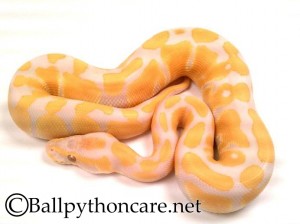 Albino ball pythons are a single gene base morph mutation that is inherited in a simple recessive fashion. That means you must have two copies of the gene in order for it to be displayed, so all albinos are actually carrying two copies of the gene for albinism. That being said, if you breed an albino to a normal ball python then all of the offspring with look normal, but will carry one copy of the gene for albinism aka albino. If you happen to breed those offspring together you have a 25% chance at producing an albino out of four eggs. All in all, pretty simple stuff.

As far as physical appearance goes albinos are show stoppers, what I mean by that is everyone loves an albino because they are so drastically different from the normal wild type ball python. Contrary to popular belief they don’t lack all color pigment, they only lack black and brown which leaves you an animal that is mainly just orange, yellow and white with red eyes.

Background and History of the mutation

The albino ball python is pretty much the granddaddy of all the ball python morphs. I remember looking through Reptiles Magazine back in the mid 90’s and seeing ads for albino ball pythons by Bob Clark. I remember thinking how awesome it would be to own such a sought after animal. You see at that time in the game these guys were going for , 000 dollars apiece. Just to get normal looking animals that carried the albino gene (which is also known as heterozygous) was , 000 dollars for a male and female pair. 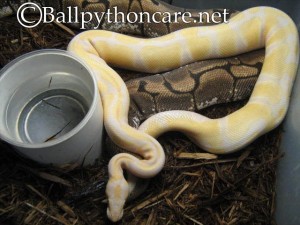 At that time there really wasn’t much of a ball python morph game, that wouldn’t really pick up for another 4-5 years after the albinos came to market.

Odd behaviors or occurrences with the gene

Please keep in mind when you read this section about odd behaviors or occurrences it’s just my opinion based on my experience working with the gene in discussion. From my limited experience working albinos I’ll say that my animals didn’t seem to be the best feeders. Now that could be due to some other factor in my little micro environment, but my animals didn’t really seem like a good thriving group. I had the same experience with my heterozygous animals as I did with my homozygous animals. Talking with other breeders, I heard another common complaint which was the females didn’t seem to be the best producers either. Of course, that’s just hear say, but in my personal opinion this gene doesn’t seem to be the strongest gene out there, but like I said, take that with a grain of salt because of my limited experience working a small group.

(1) HOW TO - Set up Tank and Handle Ball Python

How To Care For Ball Pythons 1080p HD