All about Ball Pythons

All About Ball Pythons 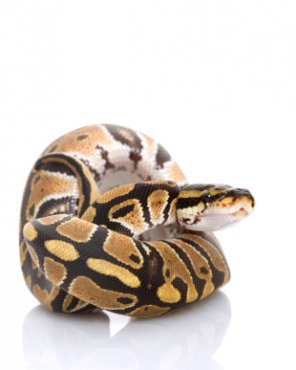 Before making the decision to own a ball python as a pet, you’ll want to make sure to read all about having a snake as a pet and determine if having a snake is a good idea for you. Ball pythons are actually one of the best pet snakes to have because they are generally not as large as other constricting snakes and are rather docile and easy to handle.

Ball pythons grow to be a maximum of 3-5 feet and can be excellent pets if given the proper care. While growing, ball pythons will increase in length by about a foot a year for 3-5 years. The lifespan for a ball python is generally in the 20-30 year range, though some pet ball pythons have been reported to leave for up to 50 years.

Ball pythons are named for their reaction when threatened – the snake will roll itself into a tight ball and tuck it’s head inside its coils. When bred in captivity, ball pythons seem to be a lot less likely to feel threatened by their owners and resort to curling into a ball. Captive bred ball pythons are also less likely to have parasites. Finding a pall python bred in captivity can be harder and more expensive than having a wild-caught pall python, but the extra cost is often worth it in terms of getting a quality snake with good health that will make an excellent pet for many years.

When choosing a ball python to keep as a pet, choose a young snake that is preferably captive bred. A healthy ball python will have clean eyes and a well-rounded body without any noticeable signs of health issues such as wheezing. A young, healthy ball python will also behave a certain way when handled. If the ball python is immediately scared and curls into a ball without loosening up after a few moments, the snake will probably not make a good pet. Find a snake that will let you handle it, gripping your hand and arms while you hold it and eventually feeling comfortable with your touch. You can also try feed the snake before you purchase to make sure that you will have no problems with feeding since ball pythons are notoriously one of the harder snake breeds to feed.

all my ball pythons

Baby Ball Pythons all out of the eggs Part 3

LEARN ALL ABOUT THE BALL PYTHON PART 2

LEARN ALL ABOUT THE BALL PYTHON PART 1
Related Posts