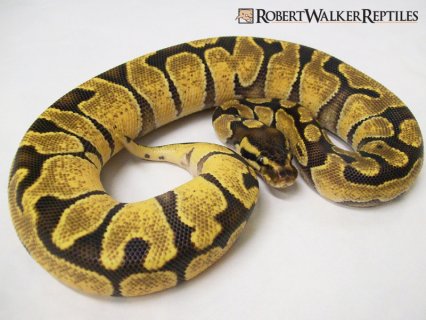 In 1998 a friend of mine had established, as it turned out, a very valuable contact in Ghana. We ordered and received a shipment of farmed Regius juveniles. The purpose of the shipment was to get a number of females to our project ”Pie Ball”, but we had also been promised a few special animals. Among these, in a special ”bag”, there were a few animals, out of the ordinary. Two of these were identical and furthermore, a pair. In 2002 I put this pair together for breeding, as well as a high gold female and a normal female with this special male. We were not disappointed. It turned out that these animals had so called dominant genes. The first captive bred Enchis were born.

At the time of the hatching we did not know hat to expect. To our great delight, the result was as follows:

These juveniles are getting more and more beautiful as they grow. The colours go from warm orange to bright yellow.