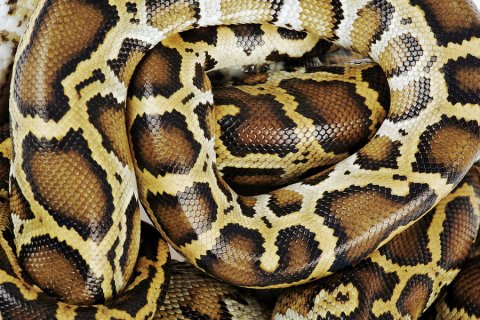 Physical description: Burmese pythons are one of the six biggest kinds of snakes in the world. They can weigh up to two hundred pounds and can grow up to 240 inches (20 feet long). Burmese python hatchlings are anywhere from 18 to 29 inches. These hatchlings weigh around 4 ounces. The largest pythons are always female. They can grow from 13 to 20 feet while the typically smaller males grow from 8 to 17 feet. However, most Burmese pythons in general grow to a length of around 8 feet. The males and females can be "distinguished by external features. In males the anal spurs on each side of the cloaca are much more developed than in females. Females often have different coloration and a smaller head relative to the body." It is not known how long that a Burmese python will live in the wild for they have not been marked. However, one of these pythons lived "in the San Diego Zoo ... 22 years 9 months. Pythons are constrictors, therefore they don't have fangs and they are non-venomous. They have back-curving teeth which seize the animal and don't allow them to escape. Because the snake's body is long and thin, the organs are long and thin also. Snakes usually only have one thin lung. However, "pythons have two lungs" - one of which is considerably smaller than the other. They lack eyelids but they do have a thin epidermal membrane covering the eyes to protect them. They have "supraorbital bones on the sides of the skull. The pre-maxillary bone generally bears teeth. They have small heat pits, or holes, in their upper lip which allows them to "detect heat radiations" that are in the air from animals that are close by. They also have two rows of tail scales.

Me with my Albino Green Burmese Python