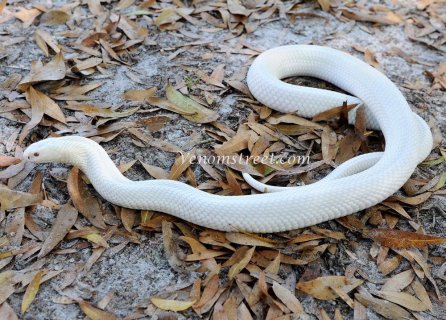 Latin Name: Python molurus bivittatus
Lifespan: In the wild Burmese pythons can live up to 25 years.
Length and weight:
The average adult length is 3.6 meters (12 feet) and 45 kg (100 pounds). Large adults can weigh as much as 90 kg (200 pounds).
Diet:
Their diet consists of rats, mice, birds and lizards, large Burmese pythons have been known to prey on larger animals such as goats and pigs.
Breeding and reproduction of Burmese Pythons:
After a successful copulation the Burmese will have a 3 month gestation. 10 – 40 eggs are laid from March to April.
The female helps to incubate her eggs by coiling around them and regularly twitching her muscles, this warms up the muscle tissues so much that she can raise the temperature around the eggs by several degrees.
The eggs hatch after a 2 month incubation period.
Habitat:
Burmese pythons can be found in forests, woodlands, grasslands, marshes and jungles. They are very dependent on water which is why they are normally found close to a source such as a brook or stream.

Interesting facts on the Burmese Python

The Burmese python is also known as the Indian python
They are excellent swimmers and are capable of submerging under water for over half an hour.
A distinctive feature of identification is the dark “arrow head” shaped marking on top of the pythons head.
The world record longest Burmese Python ever recorded was a female named “Baby” from the Serpent Safari Park in Illinois. She was measured at 5.74 meters (18.8 feet) and lived for 27 years.
When compared to other large species of snake, the Burmese python is the 3rd longest in the world.
This species only naturally occurs in Asia but can be found in the Everglades of Florida possibly due to escaped pets and owners releasing them into the wild when they no longer can look after them properly.
The Burmese python is considered an invasive species in Florida and with their numbers increasing they continue to spread. Share to Pinterest
Source: world-of-reptiles.blogspot.com