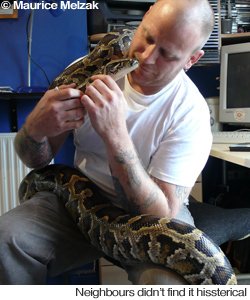 Thousands of people have signed a petition calling for increased restrictions on snake owners - after a man's pet python ate his neighbour's cat.

Darren Bishop says he only took his eyes off his 13ft Burmese python snake - ominously named Squash - for a few minutes while it was in his garden over the summer.

However, in that time his neighbours cat 'Wilbur' wandered into the Bristol garden… unfortunately it never made it back out, but the snake came back with a cat-sized bulge.

As a result Wilburs owner is now campaigning for a change in the law which would require owners of constrictor snakes to get a licence, they are not currently covered by the Dangerous Wild Animals Act (DWAA).

Personally we think a 'Danger: Guard Snake Slithering" sign would suffice… and it would be worth it just to see the postman's face.

Martin Wadey has amassed more than 4, 500 signatures on an e-petition on the 10 Downing Street website calling for the introduction of "Wilbur's amendment."

But in a video by Pet Street, a social networking group for animal lovers, Darren says he thinks such legislation is unnecessary… adding that it incident happened because the cat wandered into his garden, not because the snake escaped.

BURMESE PYTHON: Seen As A Monster (But Our Loving Pet)

Burmese python at a pet shop