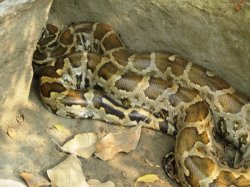 The sighting of a giant python at the DND Flyover brought traffic there to a halt. There was mayhem after the unusually large reptile was spotted on the bridge. The Wildlife SOS 24 hour rescue helpline was flooded with “distress calls” this week. In this week alone, Wildlife SOS came to the aid of three giant Pythons ranging between 8 to 12 feet. In the most recent incident on December 17th, a python was spotted on the DND flyover. The well-trained team from the Wildlife SOS, managed to restrain the giant snake, which weighed close to 23 kg.

Earlier this week, Delhi NCR had two surprise visitors who were found by the panic stricken early morning joggers. The local Police was informed who in turn requested the Wildlife SOS rescue helpline. The rapid response team immediately left for the place and rescued the reptiles he Wildlife SOS team worked with extreme caution, minding their own safety as well as that of the snakes. After some time, they were able to gently get the snakes into a safe transport container. 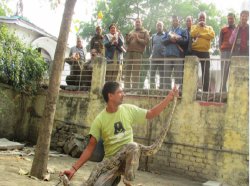 Kartick Satyanarayan, Co-founder, Wildlife SOS said, “There is a need for us to respect the biodiversity around us. Pythons are feared because of their large size; however they are non venomous and often killed due to human ignorance. They are an endangered species and have the same level of protection as the tiger under Wildlife Protection Act 1972.”

Geeta Seshamani, Co-founder of Wildlife SOS says, “We are intolerant of our surroundings and people are developing each and every piece of land. In winters, snakes usually remain dormant and seldom emerge, but the rampant construction in Delhi NCR is forcing these snakes to emerge in this bitter cold which is harmful for them.”

Currently the pythons are under observation and will be released in natural habitat shortly.

Wildlife SOS runs the only 24-hour Reptile Rescue Cell in the National Capital Region (NCR) areas of India, which includes urban metropolitan hubs like Delhi, Noida and Gurgaon. As a result of Wildlife SOS’s efficient and prompt rescue efforts over the past decade, the city’s Police Control Room diverts the Wildlife Rescue calls they receive to our headquarters in Delhi. WILDLIFESOS.ORG Hotline works round the clock to help wildlife in distress.