EVERGLADES NATIONAL PARK, Fla. (CBS4/AP)- A 16-foot long python was captured and killed in the Florida Everglades, according to the Florida Fish and Wildlife Commission.

Water management contractors working in the Florida Everglades captured and killed the giant Burmese python, which they said had just consumed an adult deer.Scott Hardin, exotic species coordinator for the Florida Fish and Wildlife Commission, said workers found the snake on Thursday. 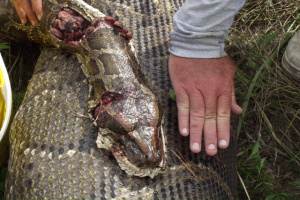 The reptile was one of the largest ever found in South Florida, weighing in at 139.1 pounds without the deer and