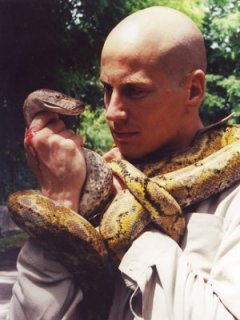 A University of Queensland researcher has found the potential for Australian doctors to prescribe expensive antivenom to snake bite victims who don’t need it.

Associate Professor Fry said that although pythons were non-venomous, “relic” traces of venom in their saliva could trigger the extremely sensitive snake venom detection kits.

“Using antivenom to treat patients with python bite injuries could potentially trigger life-threatening allergies to the antivenom, without the benefit of curing a snake bite, ” he said.

“Unnecessary use of the antivenom reduces stocks available for patients who actually need it.”

Associate Professor Fry said this highlighted the decisions about administering antivenom should be based on the severity of clinical symptoms.

“A venom detection kit should be used to ensure that the appropriate antivenom is given, but it is sometimes mistakenly used as a diagnosis of snakebite by itself, ” he said.

“All snakes evolved from a common ancestor that was a venomous lizard.”

“Evolution is like a crime scene, there is always evidence to be found if the scientist is a good enough detective.”

Associate Professor Fry said snakes had varying potency of ‘venomosity’ ranging from those capable of life-threatening bites, such as cobras or taipans, to those that have lost almost all their venom, such as egg-eating sea snakes and pythons.

Previous studies that found python saliva could cross-react in the snake venom detection kit were dismissed as an anomaly.

“The extremely low levels of toxins in their mouths have no effect on prey or bitten humans, however in forensic-level diagnostic tools like the snake venom detection kit, they cross-react and give a false positive.”

“We have found that the low level of ancient toxins still secreted in these glands includes novel compounds quite different than those from their well-studied cousins like rattlesnakes or mambas.”