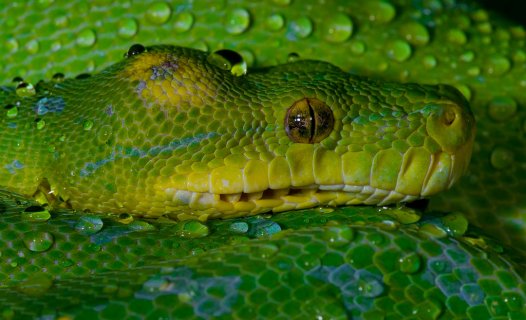 Young snakes are brilliantly colored golden-yellow or brick-red, colors found in native arboreal flowers. The green color of adults helps conceal them amongst the foliage.

The tight coil, prehensile tail, and color of these pythons are adaptations allowing for life in the treetops. These snakes also have well-developed heat sensory pits along their lips which are used in locating warm-blooded prey. When resting, it loops itself saddle-fashion over a branch, anchoring itself with its prehensile tail and cradling its head in the middle of its comfortably draped coils.

The green tree python is oviparous. Leathery-shelled eggs are laid and incubated for about 47 days depending on temperature.

The green tree python looks amazingly similar to another snake, the green emerald tree boa, Boa canina, which is native to South America. This is an example of convergence between two different species in remote but similar habitats.