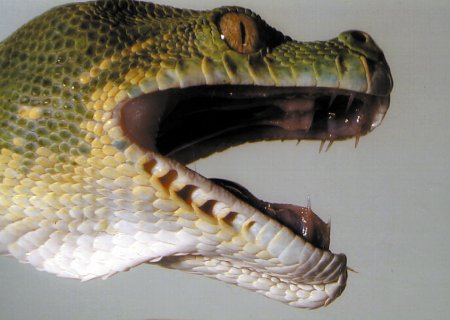 Habitat and Distribution: Found in tropical rainforests and secondary forests of New Guinea, parts of Indonesia, and the Cape York Peninsula of Australia.

Reproduction: Like all pythons, green tree pythons are, meaning that they lay eggs. Females protect and incubate their eggs, which are laid in the hollowed portions of tree limbs. Hatchlings are usually yellow, but are sometimes orange, red, blue or gold. They gradually turn green over 6-8 months.

Behavior: Green tree pythons are mostly, remaining in trees during the day and venturing down to the ground at night. When resting, they loop coils of their body over a branch and place their head in the center. They capture prey by holding onto a branch with their prehensile tail and striking out from an S-shaped position.

The conservation status of green tree pythons is difficult to determine because they are hard to count in the wild. They are assessed as "endangered" by some classification systems. Some populations may be vulnerable to logging and habitat destruction, and in some areas they are hunted for their skin and meat.