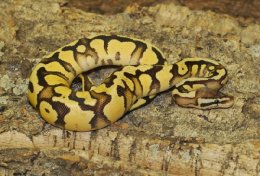 A viral origin for a fatal respiratory disease found in captive ball pythons may have been identified.

Investigators observed the virus, which they named ball python nidovirus, in eight snakes with pneumonia; virus levels were highest in the animals' lungs and other respiratory tract tissues. The team also sequenced the genome of the virus, finding it to be the largest of any RNA virus yet described.

Ball python guys like a LOT of different things!