Invasive Burmese Pythons are not only in Florida, they have already 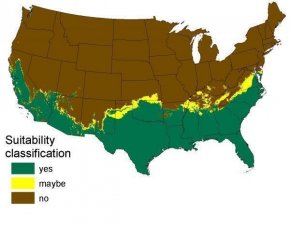 ScienceDaily (Feb. 24, 2008) — Burmese pythons—an invasive species in south Florida—could find comfortable climatic conditions in roughly a third of the United States according to new “climate maps” developed by the U.S. Geological Survey (USGS). Although other factors such as type of food available and suitable shelter also play a role, Burmese pythons and other giant constrictor snakes have shown themselves to be highly adaptable to new environments.

The just-released USGS maps can help natural resource agencies manage and possibly control the spread of non-native giant constrictor snakes, such as the Burmese python, now spreading from Everglades National Park in Florida. These “climate match” maps show where climate in the U.S. is similar to places in which Burmese pythons live naturally (from Pakistan to Indonesia).

A look at the map shows why biologists are concerned.

Areas of the continental United States with current climate matching that of the pythons’ native range in Asia. By 2100 the yellow “maybe” area is expected to extend north substantially, due to projected climate change. (Credit: USGS)

The maps show where climate alone would not limit these snakes. One map shows areas in the U.S. with current climatic conditions similar to those of the snakes’ native ranges. A second map projects these “climate matches” at the end of this century based on global warming models, which significantly expands the potential habitat for these snakes.

Biologists with Everglades National Park confirmed a breeding population of Burmese python in the Florida Everglades in 2003, presumably the result of released pets. Python populations have since been discovered in Big Cypress National Preserve to the north, Miami’s water management areas to the northeast, Key Largo to the southeast, and many state parks, municipalities, and public and private lands in the region.

“Wildlife managers are concerned that these snakes, which can grow to over 20 feet long and more than 250 pounds, pose a danger to state- and federally listed threatened and endangered species as well as to humans, ” said Bob Reed, a USGS wildlife biologist at the Fort Collins Science Center in Colorado, who helped develop the maps. “Several endangered species, ” he noted, “have already been found in the snakes’ stomachs. Pythons could have even more significant environmental and economic consequences if they were to spread from Florida to other states.”

Control of exotic species is often prohibitively expensive once they have become established. Therefore, prevention through screening and risk assessment is of great importance, especially when protecting continental areas from invasive reptiles, said USGS invasive snake expert Gordon Rodda, also of the Fort Collins center. USGS scientists and their partners are seeking to compile the scientific data necessary to guide management efforts to prevent further introductions, control existing populations of snakes, and contain their spread.

Biology and Impacts of Invasive Burmese Pythons in Florida ...