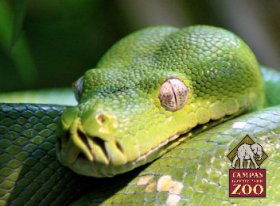 The green tree python is a non-venomous, small, slender species of python that is almost entirely arboreal meaning that it prefers to coil over a tree branch rather than rest on the ground. Virtually all activities including eating, drinking, and breeding are accomplished in tree tops. These pythons lure their food in by sitting very still on a branch and dangling their tail which causes their prey to become curious and get close enough for a strike. Green tree pythons should not be handled for they have a reputation of being an aggressive species that are nervous and quick to bite if they feel trapped or threatened. However, they are known to adjust fairly well to captivity and are usually quite docile unless provoked.

The green tree python is considered to be one of the most beautiful snakes in the world. Its species ranges in colors, but they are typically green as the name implies. They can also be partially yellow and have blue and white spots. Some females will become blue following pregnancy and these blue adults are extremely rare and prized by breeders. Baby species do not look like adults, yet instead hatch out yellow, red, or brown. Between six months to a year, they change to their adult color.